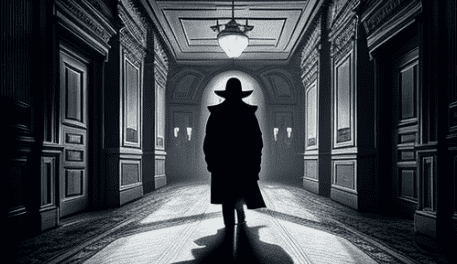 There are times when almost all of us, for a brief second, have seen a shape or movement out of the corner of our eye, and when we turn to look it’s gone, but for some people, when they turn to look, they see a distinct, shadowy form.

Shadow people are a paranormal phenomenon of human or animal shaped darkness that some consider to be a supernatural entity. Encounters with shadow people range from an optical flicker in the viewers peripheral vision to seeing a full bodied shadow leaving the observer with a feeling of dread, or worse, a frightful encounter.

While the vast majority of those who encounter shadow people don’t really give it much thought, there are some people whose contact with these entities has been continuous and traumatic.

So… What Are Shadow People?

Paranormal author Heidi Hollis describes Shadow People as the shadowed, human shaped silhouettes that you see flicker in the edge of your vision, and while that is the extent of the experience for most people, she has documented in her books that some people have been attacked by them as well.

Hollis also believes that some the Shadow People that are encountered, are possibly alien beings with nefarious agendas.

She has said in interviews that these beings can also shapeshift and take on the appearances of various animals like cats, rats and other larger animals, and some have commonly reported a shadow of just a human shaped head and shoulders that flow down and fade away before the legs and feet.

A more “evil” being is the “Hat Man”. Described as a human shaped shadow, possibly in a long coat, but always wearing a wide brimmed hat. This entity is exceptionally evil, physically harming those who encounter it, in some cases, young children. She documents the world-wide encounters with this being in her book The Hatman: The True Story of Evil Encounters.

According to psychic medium Carolyn Molnar, Shadow People are just another manifestation of spirit much like a ghost, and aren’t to be feared. She doesn’t subscribe to the theory that they are malevolent beings, and that “they are not here to hurt us, they’re just here enjoying their “life” on the planet.

There are several medical explanations that may account for someone seeing a shadowperson. One possible explanation is drug use. Certain drugs, such as psychedelics, can cause visual hallucinations and other distortions of perception that may lead someone to see shadowpeople.

Sleep deprivation can also cause visual hallucinations and other distortions of perception, which may lead someone to see shadowpeople. When we are sleep deprived, our brains may have difficulty processing visual information correctly, which can result in strange and often frightening visual experiences.

Eye floaters are another possible explanation for seeing shadowpeople. Eye floaters are small, shadowy shapes that move around in one’s field of vision. These floaters are caused by small clumps of cells or other matter that move within the vitreous humor, the clear gel-like substance that fills the eye. While eye floaters are generally harmless, they can be annoying and can interfere with vision. Some people may mistake eye floaters for shadowpeople, especially if they are seeing them in their peripheral vision.

It’s worth noting that these medical explanations are not mutually exclusive, and it’s possible for someone to experience shadowpeople due to a combination of factors. Additionally, it’s important to keep in mind that not all instances of seeing shadowpeople can be explained by medical or scientific means. Some people may genuinely have experiences that cannot be easily explained by current knowledge.

How To Deal With Encounters

If you have encountered a shadowperson and are feeling scared or threatened, the best thing to do is to try to remain calm and remove yourself from the situation. If you are in your home, you can try leaving the room or turning on a light to help dissipate the shadowy figure. If you are outdoors, you can try moving away from the area or seeking shelter.

There have been some reports of people claiming that they have been harmed or threatened by shadowpeople. However, it’s important to keep in mind that these reports are largely anecdotal, and it’s difficult to verify the veracity of these claims. Some people may exaggerate or invent stories of encounters with shadowpeople for attention or other reasons.

It’s also worth noting that many people who have encountered shadowpeople do not report feeling threatened or harmed by them. In some cases, people may actually feel comforted or reassured by their presence.

It’s important to approach claims of harm caused by shadowpeople with skepticism and to consider other possible explanations for the reported events. In some cases, the harm or threat may be the result of a misunderstanding or misperception, rather than an actual encounter with a shadowperson.

If you are concerned about the possibility of being harmed by a shadowperson or any other supernatural entity, it’s important to seek support from trusted friends, family members, or even a professional paranormal investigator.