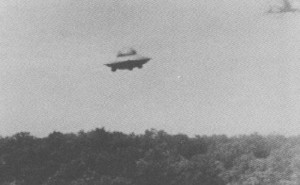 During the height of the cold war and the public interest in UFO’s being stoked by the space program and countless science fiction films, the CIA had been collecting and investigating reports of UFO sightings from all over the world. These files include sightings from Germany, Spain, North Africa, The USSR and many more.

The pdf files are scanned in with some sensitive information blacked out, but make for interesting reads.

One such report, dated 9 Jul 1952, is about “FLYING SAUCERS” IN EAST GERMANY. Oscar Linke, a former Mayor of Gliemershausen, was with his 11 year old daughter and made the following sworn statement in front of a judge.

“While I was returning to my home with Gabriella, a tire on my motorcycle blew out near the town of Hasselbach. While we were walking along toward Hasselbach, Gabriella pointed out something which lay at a distance of about 140 meters away from us. Since it was twilight, I thought that she was pointing out a young deer.” he stated. “I reached a spot about 55 meters from the object, I realized that my first impression had been wrong. What I had seen were two men who were now about 40 meters away from me. They seemed to be dressed in some shiny metallic clothing. They were stooped over and were looking at something laying on the ground.” Linke continued, “I approached until I was only about 10 meters from them. I looked over a small fence and then I noticed a large object whose diameter I estimated to be between 13 and 15 meters. It looked like a huge frying pan.”

This is just one documented report of many more. Here is a link to the official government CIA site where you can read through these fascinating documents at your leisure. 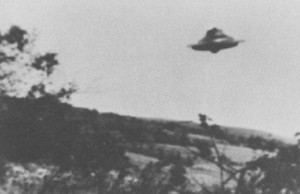