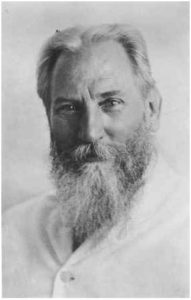 C.W. Leadbeater was born 16, February 1854, and passed on 1, March 1934.  He was an significant member of the Theosophical Society, wrote many books on occult subjects, and was a founding member of the Liberal Catholic Church.

He began as a priest in the Church of England, but he was drawn to spiritualism and moved on to the Theosophical Society. Eventually he became a high ranking member of the society, but because of scandal wound up resigning. Years later, with the help of Annie Besant, he was re-admitted into the occult order. Being a prolific writer, he wrote over 69 books and pamphlets on the subject of the occult. He continued writing and working with the society up to the time of his death in 1934.