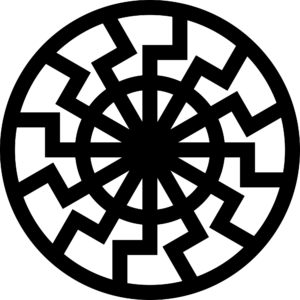 Black Sun, or Schwarze Sonne in German, is a design that decorated the Wewelsburg Castle floor as a mosaic during the Nazi reign of Germany.  It is a twelve spoke wheel that is possibly a variation on the swastika.

The castle became the meeting place of the SS and Heinrich Himmler and was the center of their occult practices. The design was drawn for Heinrich Himmler from an “old Aryan emblem”, and was meant to simulate the Round table of Arthurian legend with each spoke of the sun wheel symbolizing one “knight” or Officer of the “inner” SS. The symbol of the Black Sun is purported to combine the three most important symbols of Nazi philosophy – the sun wheel, the swastika and the stylized victory rune.” and that it is representational in its form symbolizing “the twelve SS Knights of The Order of the Death’s Head and their three retainers.

In Alchemical doctrine, Black Sun represents the moment when light and dark reverse. Our souls return to where they originated, and our consciousness hologram ends.

It is also related to solar eclipse.

In Mesoamerican mythology, it is related to the god Quetzalcoatl and his entrance into the Underworld.