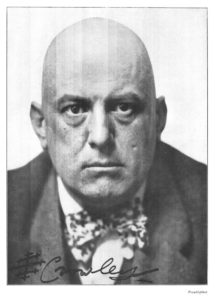 Aleister Crowley was born Edward Alexander Crowley on October 12, 1875, to a wealthy family in Warwickshire, England. He was a mountaineer, painter, poet and novelist, but is probably best remembered as an occultist and ceremonial magician.

Crowley’s father, Edward Crowley (1834 – 1887) died when Aleister was 11, from tongue cancer. Edward was an engineer but gained the bulk of his wealth from the families brewing business Crowley’s Alton Ales. Alesiter’s mother Emily Bertha Bishop (1848 – 1917) had a very strained relationship with the young boy. She gave him the nick name “The Beast” because of his behavior. Both parents were devout Christians and when Aleister was 8, the sent him to H.T Habershon’s evangelical Christian boarding school.

Later Crowley attended Malbern College and Tonbridge School, but he hated his time there and left after a short time. During this time Aleister’s suspicion of Christianity continued to grow due to inconsistencies he found in the Bible. This combined with the torturous treatment he received as a young child at the Christian boarding school, turned his direction away from the church and towards a more hedonistic life which included drugs, masturbating, smoking an getting gonorrhea from having sex with prostitutes. He pursued his interests in poetry, chess and in 1894 he joined the Scottish Mountaineering Club. Crowley climbed Eiger, Jungfrau, Wetterhorn, Trift and Monch  in the Bernes Alps as well as other well known climbs.

From 1895 to approximately 1898 Aleister Crowley attended Trinity College in Cambridge studying philosophy. He later changed his studies to English Lit. In 1896, he experiences what is believed to be his first mystical experience when he was vacationing in Stockholm. In 1897, an illness led him to question “the futility of all human endeavor”, this is where Crowley’s path took a more direct turn in the direction of occult studies. 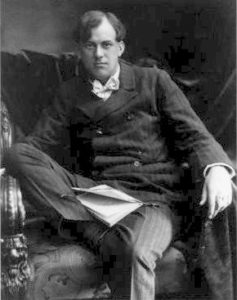 While in Switzerland in 1898, he came across Julian L. Baker, a chemist who also shared Crowley’s interest in alchemy. It is Baker who introduced Crowley to George Cecil Jones, a member of the Hermetic Order of the Golden Dawn. In November of that same year, MacGregor Mathers initiated Crowley into the Outer Order of the Golden Dawn. Crowley Progressed quickly through the lower grades of the order showing a voracious apatite for sex, drugs and ceremonial magic. When he was ready to join the groups Second Order, many in the organization were unhappy with him due to his libertine way of living that had created a poor reputation. He was initially denied initiation into the Second Order, but Mathers personally admitted him at the objections of other high ranking members.

The Book of the Law

Egypt, 1904. The Book of the Law, perhaps Crowley’s most well known work, was written. Crowley and his wife at the time, Rose Edith Kelly, were in Cairo practicing ceremonial magic and invoking the many Gods of ancient Egypt, when Rose would often become delirious and told him that “they are waiting for you”. They being the god Horus. Rose led Crowley to a museum the was close by and revealed to him the what was to become known as the “Stele of Revealing”.  Beginning on April 8th of 1904, Crowley dictated Liber L vel Legis or The Book of the Law from a being that went by the name of Aiwass. “Do what thou wilt shall be the whole of the Law”, the supreme law of humanity was introduced. The religion of Thelema was born from this book.

Initially Crowley disliked the text that he had written, and purposely defied the text of the law. He put the book away for several years before rediscovering it in 1909 at the Boleskine house. At this point, he developed the opinion that Thelema was objective truth.

With his inheritance dwindling, Crowley took on paying students to teach occult practices to. He also continued his prolific writing producing works such as Konx Om Pax, several short horror stories, magazine articles and Liber 777. It was in 1907 that he decided to form The A:. A:. , with the cooperation of George Cecil Jones. The Argentium Astrum or The Order of the Silver Star.

In The fall of 1909, Crowley and Victor Neuburg travelled to Algeria, visiting the desert from El Arba to Aumale, Bou Saâda, then onto Da’leh Addin, with Crowley quoting the Quran every day. Throughout the trip he invoked the thirty aethyrs of Enochian magic, with Neuburg recording the outcomes, later printed within the Equinox because the Vision and the Voice. Carrying out a mountaintop sex magic ritual, Crowley also carried out an invocation to the demon Choronzon said to involve blood sacrifice, the outcomes to become a watershed in the magical life. Coming back to London in the month of January 1910, Crowley discovered he was being sued for revealing Golden Dawn secrets within The Equinox, Crowley won this battle in court. The situation was broadly reported on within the press, and gave Crowley more fame. Crowley loved this, and performed like the sensationalist stereotype of a Satanist and advocate of human sacrifice, despite being neither.

The publicity attracted new people towards the A:.A:., included in this James Bayley, Frank Bennett, James Windram, and Herbert Close. The Australian violinist Leila Waddell soon grew to become Crowley’s lover. Determining to share his teachings to a wider audience, Crowley created  the Rites of Artemis, an open performance of magic having A:.A:. followers personifying various deities. It was initially carried out in the A:.A:. headquarters, with attendees given a fruit punch that contained peyote to boost their experience. Various people from the press attended, and reported largely positively concerning it. In October and November 1910, Crowley made the decision to stage the Rituals of Eleusis, at Caxton Hall, Westminster this time around, press reviews were mixed. Crowley received particular critique from West de Wend Fenton, editor from the Searching Glass newspaper, who known as him “probably the most blasphemous and cold-blooded villains of contemporary occasions”. Fenton’s articles recommended that Crowley and Jones were involved with homosexual activity. Crowley didn’t mind this, but Jones unsuccessfully accused of libel. Fuller ended his friendship and participation with Crowley because of the scandal, and Crowley and Neuburg went back to Algeria to explore more magical rituals.

The Equinox ongoing posting, as well as other books of literature and poetry were also printed under its imprint, like Crowley’s Ambergris, The Winged Beetle, and also the Scented Garden, in addition to Neuburg’s The Triumph of Pan and Ethel Archer’s The Whirlpool. In 1911,  Crowley authored the 2-volume Book 4 (1912-13) and at that time developed the spelling “magick” in mention of paranormal phenomenon as a way of distinguishing it in the stage magic of illusionists.

The O.T.O.
In 1912, Crowley published The Book of Lies, a book that was considered by Lawrence Sutin to be “his greatest success n the merging his talents as poet, scholar, and magus”.  Crowley was accused by German Occultist Theodor Russ of publishing secrets of the O.T.O. ( the Ordo Templi Orientis) within this book. When Crowley told Russ that the similarities were purely coincidental, the two became friends. Shortly after, Crowley was appointed to the head of the British branch of the O.T.O.
1914-1919
in 1914, Crowley was in financial trouble, living meagerly on donations to the A:.A:. and membership dues from the O.T.O. Crowley then boarded the RMS Lusitania and headed to the United States. He arrived in New York, and continued experimenting with magic while living in a hotel, using prostitutes for sex magic and documenting it all in his diaries.
In 1918, Crowley went on a magical vacation in the wilds of Esopus Island on the Hudson River. There, he began a translation of the Tao Te Ching, painted Thelemic slogans on the cliffs, and – he later claimed – experienced past life memories of being Ge Xuan, Pope Alexander VI, Alessandro Cagliostro, and Eliphas Levi.   When he returned to New York, he relocated to Greenwich Village, where he took Leah Hirsig as his next Scarlet Woman.   He began painting as his new hobby, exhibiting his art at the Greenwich Village Liberal Club and realizing the attention of the New York Evening World.   With the financial help of adoring Freemasons, Crowley revived The Equinox with the first issue of volume III, known as “The Blue Equinox”.   He spent mid-1919 on a climbing expidition in Montauk before going back to London in December.
1920-1923
Penniless and living in London, Crowley was suffering from asthma. He was prescribed heroin to ease the symptoms and quickly became addicted. This addiction took it’s toll and dominated his life. Cocaine ravaged his nasal cavities, but he still continued to write and experiment with magick. Crowley then moved to Italy and founded the Abbey of Thelema, where he performed sex magic that was claimed to be so tainted, that none other than Benito Mussolini forced him to leave the country. 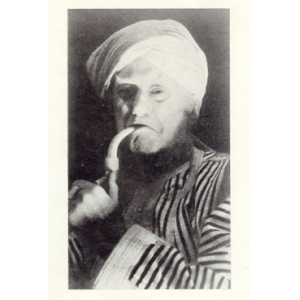 Aleister Crowley died of chronic bronchitis aggravated by pleurisy and myocardial degeneration, at age 72, on December 1st, 1947.  The funeral was held at Brighton crematorium on the 5th. There were only about a dozen people in attendance, where excerpts from The Book of the Law, the Gnostic Mass, and “Hymm to Pan” were read. As usual, the funeral created much controversy and papers called it a “Black Mass”. His ashes were sent to Grady McMurty, Crowley’s successor in the O.T.O., who buried them in his Garden in New Jersey.

This is by no means a full biography of this incredible man. Everyone’s opinion of him was different. If you have further interest in “the wickedest man alive”, there are many fascinating books about him, but without a doubt, the most interesting books are the ones by him.