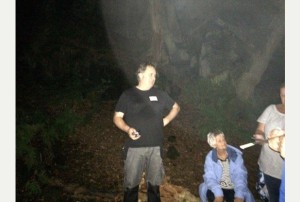 From the Ashbourne News Telegraph.

Giant orbs of light have been captured on film during a paranormal investigation in Shining Cliff Woods, near Ambergate.

The footage was taken by Haunted Company, a paranormal investigation company from Wirksworth.

Andrew Elson the founder of Haunted Company said: “I have never in my life seen or captured orbs this big on a photograph

“At the time the images were being captured the paranormal activity was exceptionally high, our electro-magnetic field meters were off the scale

and several members of the team felt presences close to them.

“This was an exciting and scary event”.

to capture several orbs in different directions at the location for a period of around five minutes.

Andrew said: “Previous images of the same area taken just before the paranormal activity started show no sign of the orbs.”

The team together with guest paranormal investigators said they also experienced

voices being heard on iPad radios, alongside communication taking place through dowsing rods and pendulums.