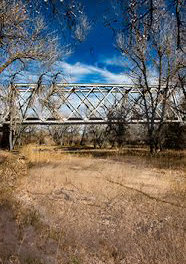 While living just south of Denver, in Castle Rock, Colorado, I would hang out with some local paranormal investigators at a local microbrewery. We would trade tales of investigations and a location that really interested me because of all the paranormal activity reported there, was the Kiowa Creek Bridge

The Kiowa Creek Bridge in Bennett, Colorado is reported to have a history of ghosts bound the surrounding area. Reports by locals of a ghost train rolling over the bridge, a red eyed Hell Hound, and disembodied voices are documented. The area’s haunting may be due to the train that crashed, killing it’s passengers back in 1878.

What Happened To The Bridge To Cause The Crash?

In may of 1878, eastern Colorado was hit with heavy rains. These rains swelled some of the creeks and rivers to dangerously high levels. That was the case with Kiowa Creek. The massive rush of water ripped out the bridge’s supports and the bridge collapsed. The destruction of the bridge happened to coincide with the time the train was passing through the area.

What is the suspected cause of the hauntings?

Although warning lights were put up, the engineer, a Mr. Bennett, did not see the warning in time to get stopped, and the train plunged over the edge of the wrecked bridge an into the muddy waters of the over full creek.

Everyone on board the train was killed. The crew, the conductor, the engineer, everyone. It took several days to remove the bodies and the cars, but it was impossible to locate Mr. Bennett and the locomotive was too deep in the silt for recovery. The bridge was later rebuilt.

What are the reported hauntings of the area?

More Lore About The Bridge And The Surrounding Area.

In order to honor the memory of Mr. Bennett, the engineer who died in the crash and was never recovered, the nearby town of Kiowa was renamed to Bennett.

The bridge today is a sturdy structure, that is open to traffic. The creek bed is all but dried up. The locomotive and it’s engineer, Mr. Bennett, are still buried under the dry creek bed.