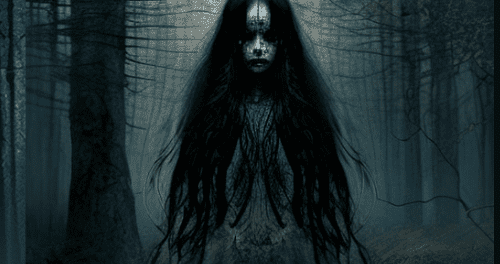 The Acheri is a spirit found in Native American folklore, particularly among the Algonquin tribes of the northeastern United States. It is often depicted as a young girl with long, dark hair and a pale, ghostly appearance during the day and an emaciated, demonic creature in the night.

According to legend, the Acheri was once a living person who died of a disease or illness. However, instead of moving on to the afterlife, the Acheri remains on Earth as a malevolent spirit, preying on the living. It is said to dwell in the mountains and forests, and is often associated with sickness and death.

The Acheri is known for its mischievous and malevolent behavior. It is said to cause sickness and death among humans, particularly children, by touching them with its cold, ghostly hands. The Acheri is also known to haunt people in their dreams, causing them to have nightmares and frightening visions.

To protect oneself from the Acheri, it is said that one can hang garlic or other strong-smelling herbs around the house, as the Acheri is said to be repelled by strong odors. Salt can also repel this entity. Also, the color red is offensive to it, so red clothing, drapes, blankets or furniture work to keep it away. Some Native American tribes also believed that the Acheri could be driven away by making loud noises or singing, as it is said to be afraid of loud noises.