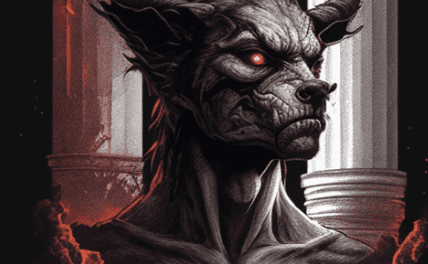 Aamon, also spelled Amon or Nahum, is a spirit in the hierarchy of Hell in some demonological traditions. He is often depicted as a demon serving under the command of Satanachia, a high-ranking demon in Hell.

According to some sources, Aamon is a Duke of Hell, with the power to govern over 40 legions of demons. Other sources describe him as a prince of Hell, with the power to influence people to sin and to uncover hidden knowledge. In some demonological grimoires, Aamon is described as appearing in the form of a wolf with a serpent’s tail, or as a man with the head of a wolf or dog.

Some sources also associate Aamon with the sin of lust, and claim that he can grant magical powers related to sexuality and fertility. In some traditions, Aamon is invoked in spells and rituals related to love and sex.